The real Deals: ATP curated by The Breeders - the SWSL diary

Over three weeks on and I think I just about feel normal again. Time to relive the first festival of the year then, methinks...

(Thanks to Marky and James for the photos, and Suresh for the videos.)

2pm
We're off - destination Minehead. And how better to warm up for the musos' music festival than by spending the journey listening to a Tony Williams album. Late 70s jazz fusion - nice!

3.45pm
Hang on a minute lads, sod all this rock 'n' roll malarkey - let's go to the Bakelite Museum in Williton! I'm overruled and we press on.

4.15pm
At the airport-style check-in (what cheeky cards Butlins are, trying to fool us that we're on holiday somewhere exotic!), we look around and realise it's like looking in the mirror - hooded tops, scuffed-up trainers and the facial fuzz of the Plan B reader as far as the eyes can see, and that's just the ladies (arf).

4.30pm
Talk about falling on your feet. Our four-person chalet is a far cry from the grim hovel we had to make do with when I last came to an ATP event, when Mogwai curated at Camber Sands nine long years ago which boasted one bedroom plus fold-out double sofa bed, intermittent TV reception, a broken handrail in the bathroom and a permanent column of ants marching across the living room carpet. This one is not only a decent size, with a well-appointed kitchen, proper separate lounge area and two bedrooms, it's clean, tidy and (best of all) less than a two minute walk to the Pavilion Stage. Plus we have a friendly limping duck to feed bread to out of the window.

5.15pm
Note to self: all the weird sonic loops, all the dots, squiggles and patterns interfering with the scheduled programming on the chalet TV are intentional, just the Breeders and ATP monkeying with our minds - so remember not to switch on later tonight after a few drinks when it's likely to be terrifying rather than just disorienting.

5.30pm
Better to peruse the pocket festival guide instead. Several names on the bill who had meant nothing to me start to sound worthy of investigation: The Bronx, Distortion Felix, X. Plus there's a Fuck Buttons DJ set on Sunday night - hurrah! And the winners of the Most Pretentious Self-Penned Programme Blurb are ... Foals! "Foals is a band formed from the brotherhood of The House of Supreme Mathematics: a communal studio, armoury and living space in the south east UK. Foals were birthed through the desire to make ecstatic, technicolour music to deny power to that evil eye, the dry casques of departed locusts, the threat of violence, the hollow heart, the meat contractor and ossifactor, the croak of kulchur, the obstructors of knowledge". Like, yeah, man.

6pm
You'd have thought a band called GIANT SAND (Pavilion) would be perfect for a festival held within a stone's throw of the beach. But it's Friday night, they're the first band of the festival and Howe Gelb's mob's slow, dusty, desertified blues fails to grab the attention, being essentially wank fodder for Uncut subscribers, and what's more feels faintly ridiculous in the context - beneath a great big canopy, surrounded by pseudo-Mediterranean bars and a Burger King (who says ATP isn't a commercial festival?!). Perhaps as the weekend wears on, seeing bands playing on this stage will come to feel less odd - I certainly hope so.

6.30pm
Now this is more like it. Call me predictable, but a bit of punch and volume and I'm already halfway to being won over. THE BRONX (Centre Stage) may have their roots in LA hardcore punk, but they certainly ain't straight edge - as is evident from cock rock cocaine blizzard anthem 'White Guilt', the one serious misstep in their set. Apparently (quelle surprise) it's their first time in Minehead, but "it's nice to playing by a body of water", says giddy bulldog of a frontman Matt Caughthran. Kudos for getting the moshpit churning and the plastic pint pots airborne before 7pm. 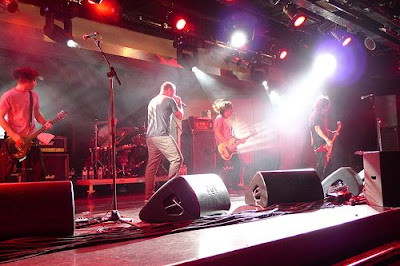 8pm
Musical blind spot alert! Can someone please explain to me why THROWING MUSES (Pavilion) are worthy of the adoration they're getting? Certainly the songs are uniformly uninspiring - though they're hardly helped by the fact that the sound is poor (Kristen Hersh's vocals are hardly discernible and Bernard Georges' bass is nullified to the point of non-existence in the mix). Before long the only reason to keep on watching is to see whether David Narcizo's drumkit, wobbling around like it's made of jelly, finally collapses. 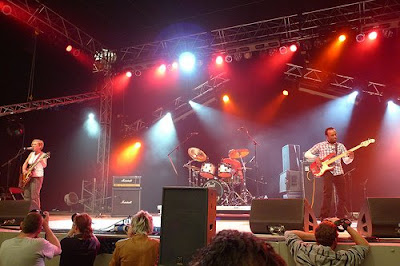 8.30pm
A first sighting of Kim Deal. Hey Kim, thanks for inviting us!

9pm
A first festival regret - that I hadn't only stumbled across YANN TIERSEN's set because I'd come up to the Centre Stage to brave its peculiarly vomity aroma and get myself a quick unimpeded pint. More than a few minutes and I can guarantee his whooshing, droney impressions of M83 and spoken word epics would have seduced me. 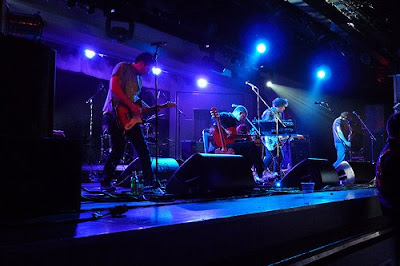 9.30pm
It's safe to say that I'm not immediately predisposed to enjoy BON IVER (Pavilion). After what felt like months of bombardment from friends, websites and even the odd magazine, I finally bought For Emma, Forever Ago in December - and was disappointed. Americana isn't usually my bag, and for me (and, I suspect, others) the album was totally overshadowed by Fleet Foxes' spellbinding debut. It doesn't start well, either - Justin Vernon's sat down, and I'm thinking if he can't even be arsed to stand... But what he and his band - make no mistake, it's a genuinely collaborative effort - actually achieve is to make the intimacy of the album work on a big stage. There's a confidence and boldness I hadn't expected, and none of the Autotune nonsense buggering up the Blood Bank EP tracks that I had. The likes of 'Skinny Love' and 'Lump Sum' take on a whole new resonance, but it's the singalong finale of 'The Wolves' that really clinches it and, mid-holler, I can feel myself filled with the zeal of a new convert. 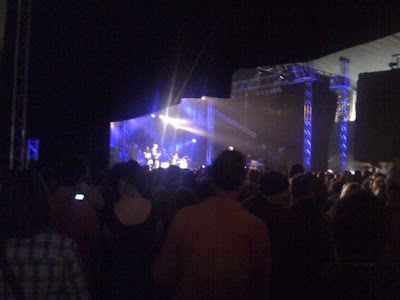 10.30pm
Everybody needs good neighbours. Turns out ours are Deerhunter, Tricky, The Soft Pack and Dianogah. Who should we go and try to borrow a cup of sugar from?

11.45pm
Back in the chalet again. Eating: falafel, cold. Drinking: cocktails consisting of Zubrowka bisongrass vodka and apple juice. Listening to: 'Pass The Hatchet, I Think I'm Goodkind' by Yo La Tengo. My idea of fun.

1am
How many discos might you go to before you came across one where the DJ plays 'Cut Your Hair' by Pavement, followed by 'The Wagon' by Dinosaur Jr, followed by 'Da Funk' by Daft Punk, followed by 'This Charming Man' by The Smiths? Quite a few, I'd imagine. Unfortunately, though, it deteriorates from there, and the queues at the bar mean we wander off, imaginary gladioli discarded on the Crazy Horse floor.

2am
Co-ordination at a premium naturally means fiercely contested games of air hockey are a must. I fight back from 4-0 down to record a heroic 7-4 win, cheered on by a bunch of youngsters apparently unaware that I'm struggling to see straight. Result!

Next time: Steve Albini, Johnny Cool and gap toothed women.
Posted by Ben at 1:36 AM

If you're interested, I think I could arrange a discounted ticket.