In which we make our way back to Blighty...

* Our journey home involves catching trains which pass through four different countries, and we marvel at the organisation and coordination between the various rail companies which ours can't even manage at national level, let alone international. There are still squabbles over reserved seats here, though, and the ticket inspector is called upon to intervene and officiate.

* We may have bid farewell to our Alpine chalet at Lake Bled, but now, travelling between Ljubljana and Salzburg, we're able to witness the majesty of the Austrian Alps for the first time, our journey in the opposite direction having been undertaken by night. The scenery is breathtaking: villages like Penk (named after the luminary of ITV clips shows and crap radio, perhaps?) crouched down in the valleys with the odd golf course nearby, green uplands and flowery meadows, fast flowing rivers, thickly forested hillsides and, contorting our necks to look upwards, sheer rock faces and snowy peaks. Still, not a patch on the view out of the window when you're travelling between Birmingham and Wolverhampton, I can tell you.

* Arriving back in Munich in the sunny early evening, there's no chance of a quiet meal. Oktoberfest may be a couple of months away yet, but the Altstadtringfest is in full swing, the fountain in Karlsplatz having been switched off to make way for a stage and a host of stalls. There's also a wine festival in the Alter Hof, and, in the midst all the men swanning around with moustaches and lederhosen, if that isn't our Stevenage-loving friend from the Hofbrauhaus queuing to replenish his glass, then he's definitely got a double. 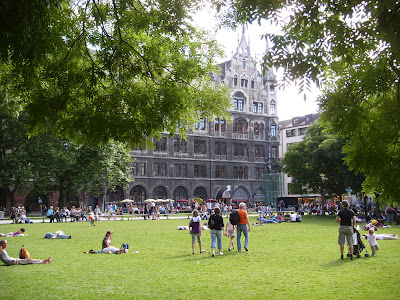 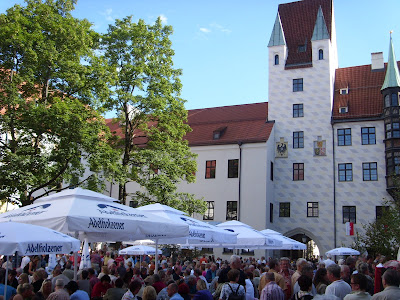 * Speaking of which, we opt to go back to the Hofbrauhaus as the likeliest place to be able to get a seat. Our slow, unsmiling waiter finishes his shift, handing on to an equally slow, unsmiling waitress who delivers the wrong soup. Not being in the mood for a thin, watery broth with a tennis ball made of liver floating in it, we endure her exaggeratedly dramatic roll of the eyeballs and belatedly get what we ordered, a potato and vegetable soup with the gloopy consistency of wallpaper paste. My pork steak with herb butter, tomato rice and salad is better, at least, and you can't argue with the litre glasses of beer we wash it all down with. Even the tat in their tourist shops looks less ridiculous when you realise that the TSV Munich 1860 club shop just down the road is peddling branded toasters. 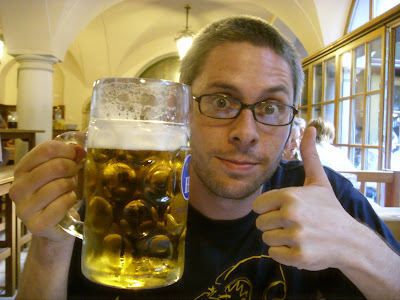 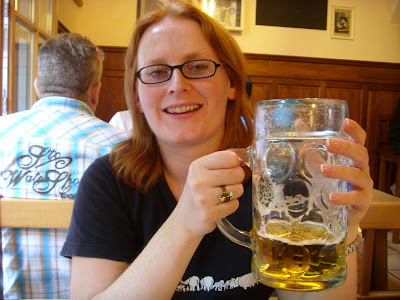 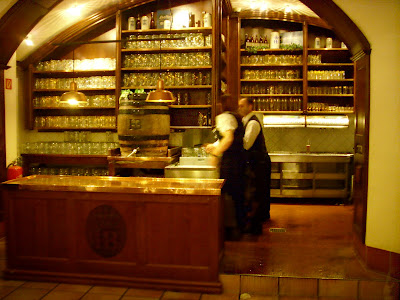 * Thankfully we're left with just enough time to be able to maintain my tradition of buying and sending the worst postcards I can find, but not enough to have to endure too much of the 'Fame Academy' style duo murdering 'Weather With You' and 'Losing My Religion' on the Altstadtringfest stage, before having to grab our luggage and jump on the overnight train to Paris. 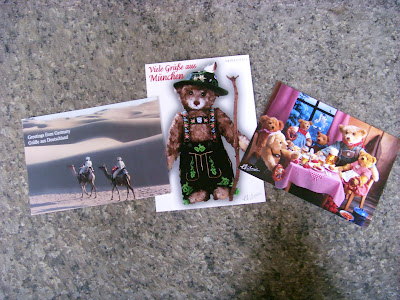 * It's a small world - no, really, it must be, when the English bloke who comes to share our compartment turns out not only to know the star author of the publishers I worked for in Wales but also to have taught in one of Jenni's old colleges in Bury.

* Our last sweaty, largely sleepless overnight journey behind us, we're back in Paris - city of "sexy shops", breads of your wildest dreams (at least that's what I assume "pains de fantasises" means) and rigidly enforced bans on brushing one's teeth in railway station toilets (as Jenni discovers to her cost). It's 7am on a Sunday morning, so the streets are awash and awhiff with the generous outpourings of Parisian men's bladders. On the steps up from the Gare de l'Est lies a small, lonely fish, presumably a remnant from yesterday's market. 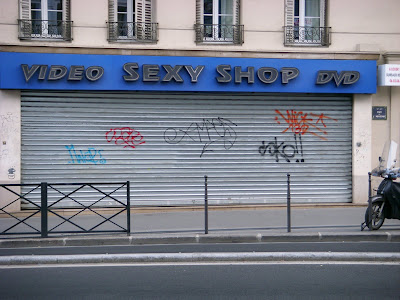 * Sacre-Coeur offers a superlative view of the city rubbing the sleep from its eyes and thinking about the next croissant. The previous evening's detritus is everywhere, street cleaners sweeping up broken glass around the last couple of party animals finishing off their remaining bottles of beer and joking with a cluster of early-rising Japanese tourists. 8am it may be, but the street hawkers are already at work. The church itself is less impressive than most of those we've visited over the course of the week, and you have to wonder about any place of worship that has no fewer than four different machines dispensing souvenir medallions at its entrance. 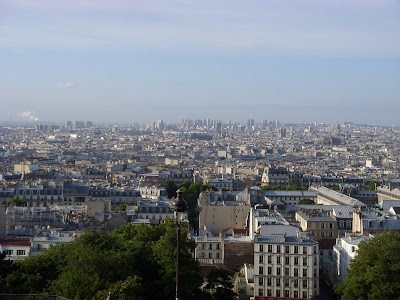 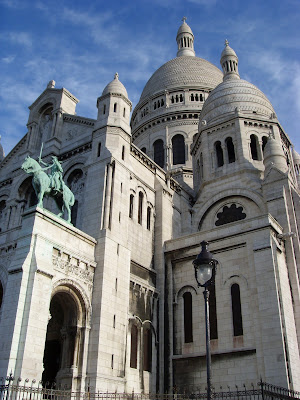 * In the Place du Tertre, the hack artists greet each other like old comrades readying themselves for another tough day fleecing tourists foolish enough to stop and consent to having their portrait done. Judging by the array of pictures displayed by way of advertisements, Harry Potter and an owl have passed by recently. 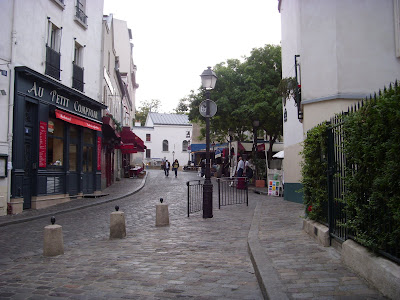 * Monmartre Cemetery is testimony to the fact that there's no stopping progress, a road bridge having been constructed over the top, skimming and dripping paint on the roofs of some of its grandest sarcophagi. The cemetery is home to monuments to Degas, Stendhal and Zola (though the latter's remains were moved elsewhere in 1908), as well as to a curious tomb which looks like a Tardis (perhaps a family plot designed to be big enough for a whole dynasty?) and a number of prowling cats on the look-out for rats or, failing that, a famous painter's ribs to gnaw on. 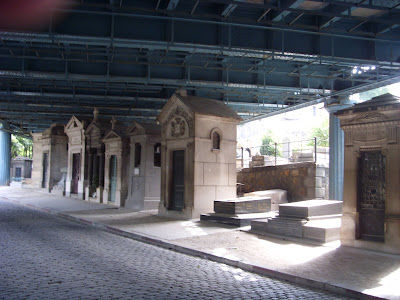 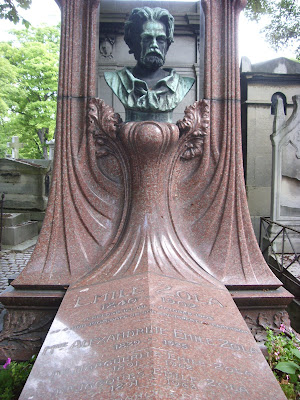 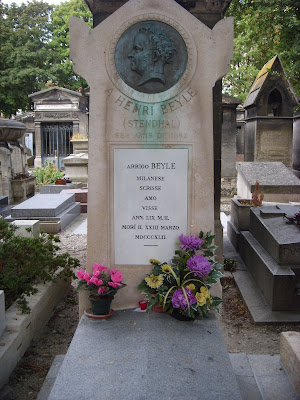 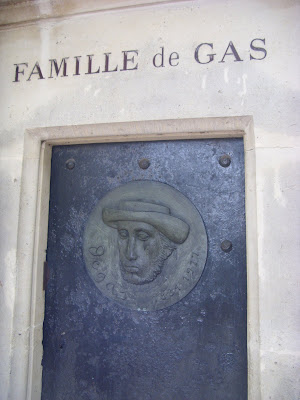 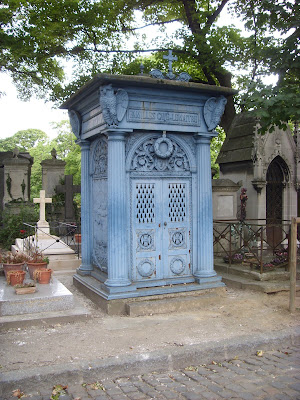 * And on that morbid note, it's off past sex shops and bewildered coach parties in Le Pigalle to Gare du Nord and the Eurostar home. Au revoir Europe, we'll come again.
Posted by Ben at 1:08 AM