(Two and a half months ago this may have been, but I’ll finish this if it kills me...)

In which we attend a fairytale wedding, meeting Slovenia's answer to Jethro and finding out what it feels like to be the French head of state in the process...

* Beware of walrus-moustached Slovenian coach drivers (is there any other sort?): they’ll cheerily convey you away out of Ljubljana and across the bowling-green-flat plains beyond towards the mountains, but on arrival at Lake Bled they’ll tell you to alight at completely the wrong place.

* At last, no thanks to a total lack of mobile reception, we meet up with the wedding party (the reason we’ve come on this trans European jaunt in the first place). Walking up a hill past a bar promising “Cocktails and dreams” (do they sell Sex In The Disabled Toilets, I wonder?), we’re greeted at our hotel Pension Mayer by a crucified Christ on a cross. Nice. Perhaps he tried to pull a fast one and get away without paying? Our accommodation for the next two nights is a typically Alpine two bedroom chalet in the courtyard, complete with steep roof and wooden panelling, which we’ve got all to ourselves and which is arguably even better than the honeymoon suite. Hurray for the fact that there’s a kettle this time, but still no other coffee-making paraphernalia. Instead, hanging from the handrail of the stairs is a walking stick with a brrrringing bike bell and empty 25 cl glass bottle for spirits attached to it – an ideal companion when lost up a mountain in the snow, I’d imagine. 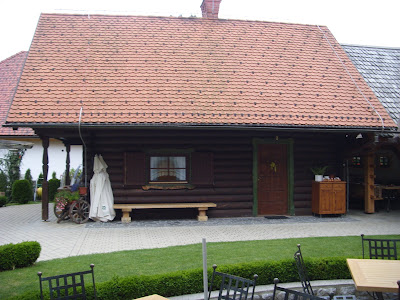 * Lake Bled is extraordinarily clear, the fish gathered under the trees towards the edge and breaking the surface further out clearly visible. But it’s not tranquillity that we’re after – no, it’s the thrill of hurtling down a steep slope on a little yellow sled running on a metal track, a kind of personalised rollercoaster. The toboggan run is an excellent way for the locals to make money in the skiing close season, and offers a great view of the castle, church, town and surrounding mountains from the top. Needless to say, it’s not long before the afternoon descends into grown men challenging and goading each other into attempting the whole descent with the control stick thrust forwards in the accelerate position. 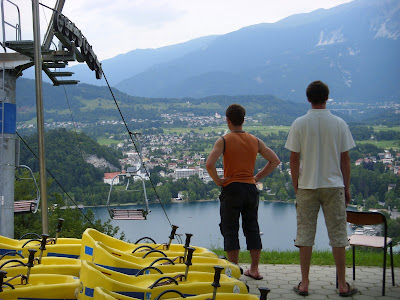 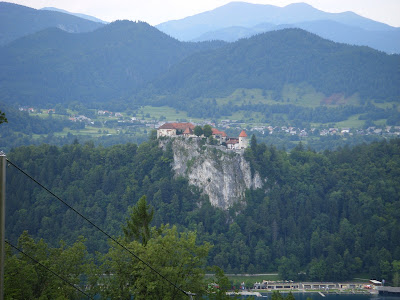 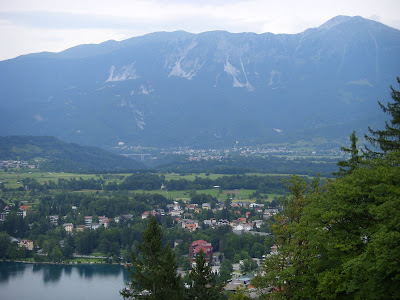 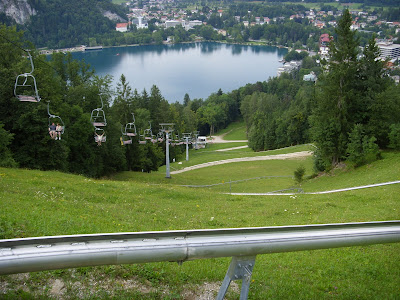 * Back at the bar area designated as our regular meeting point, we ask for Banditos only to receive not Mexican beer but something approximating Smirnoff Ice. Despite having enjoyed a three hour pampering session at a 5* hotel right on the lake, the girls are envious of our own escapades, and when they and the elder male members of the party head off to the toboggan run to satisfy the need for speed, I forget my bruised hips and eagerly join them. The bride’s father manages to post what must be a new slowest time – by the time he reaches the bottom, with the inevitable complaint that his sled must be faulty, we all feel like we’ve aged at least a couple of years. 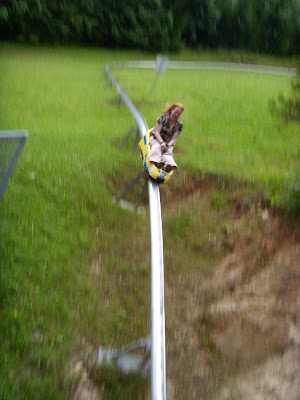 * After another durum, this time from a takeaway called Ham Ham (seriously can’t get enough of them), the wedding eve drinking begins in earnest at Vila Preseren, a classy bar with awnings which unfurl at the touch of a button and smoked glass doors giving access to the kitchen which lend the place the air of a Bond baddie’s lair. As the weather worsens considerably from a light drizzle to a fully-fledged storm, we hole ourselves up inside, comforted by the steady stream of bottled lagers. Even when we leave to walk back around the lake to the hotel, a couple of hours later, lightning continues to fork down, lighting up the cliff-top castle like something from a black-and-white 1930s gothic horror film. 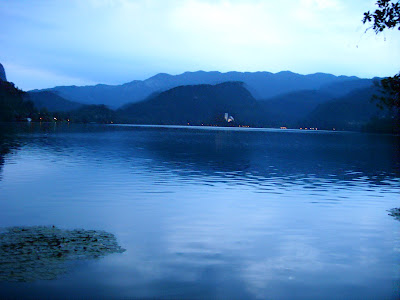 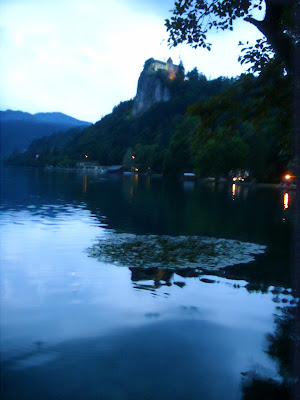 * Up after a bad night’s sleep (the thunder on one hand, the shortness of the bed necessitating a diagonal sleeping arrangement on the other), we’re pitched straight into the madness of the wedding preparations. I escape to the supermarket to get pre-ceremony nibbles for everyone. Being unable to decipher the labels, I’ve no idea what’s a dip and what isn’t, and end up buying a loaf that’s laced with onion – just what the groom wants to be tucking into before kissing his bride... 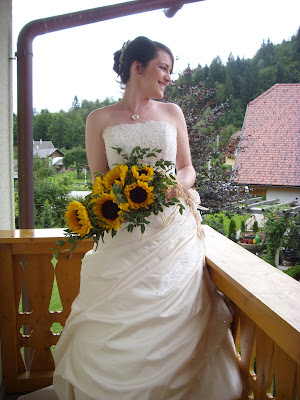 * By contrast with English registry offices – poky, functional buildings suffused with an air of bureaucracy rather than any sense of romance – this place is amazing: sitting in splendid isolation on the banks of the lake, sunlight streaming down through large French windows. A walrus-moustached council official (perhaps a coach driver in his spare time?) presides over the ceremony in Slovenian, continually drifting off-piste, gesturing and chuckling good-naturedly – and all the while the face of the polite, carefully spoken young wedding planner, who is translating for us, is a picture of concentration, as he tries to take in every digression and warm-hearted witticism. 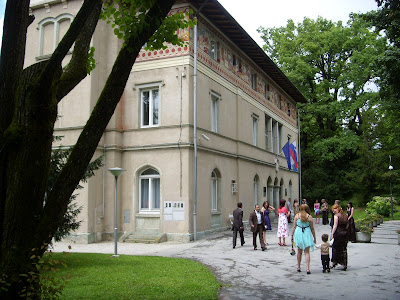 * By the time we step through the open French windows onto the balcony, the weather has improved immeasurably from its unpromising beginnings. We’re treated to a celebratory champagne reception like no other I’ve ever experienced, a bloke dressed in medieval soldier’s attire (the king, descended from the castle, we’re told) uncorking the bottles in some style with his sword. The bride and groom both get the opportunity to have a go too, before being whisked off to the water’s edge by horse and carriage. 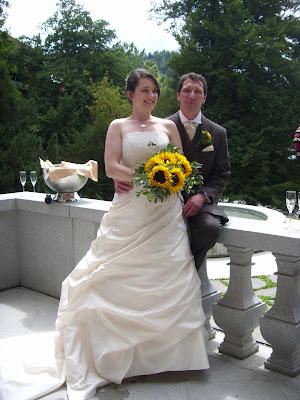 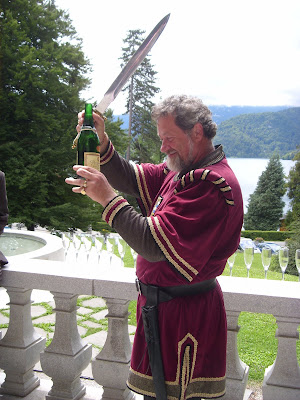 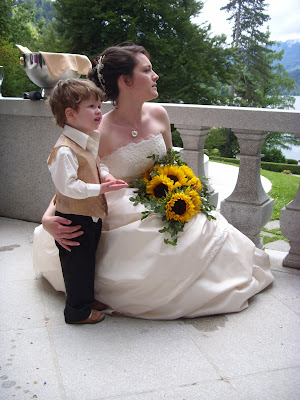 * Our gondolier extraordinaire, tasked with ferrying around 16 of our party across the lake in what is now fierce heat, is a man mountain who looks like Jethro. The island itself is more like a column that rises up out of the water, and once we’ve disembarked onto the wooden jetty it’s a steep climb up a huge flight of stone steps. Tradition apparently dictates that the groom should carry the bride the whole way - but, this particular tradition being instigated and perpetuated by British wedding parties, our groom is relieved to be able to get away with clambering up only the last three steps for the cameras. 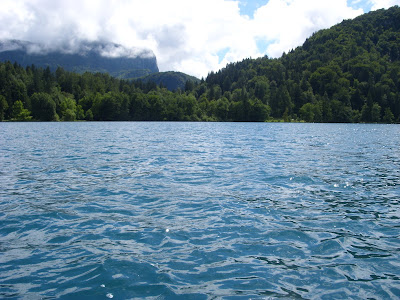 * What follows was anticipated to be a simple blessing, but actually turns out to be more like a full wedding service in a church only marginally less impressive than those dotted about the centre of Vienna. The service is conducted in English by a vicar who we recognise from the boat over, having mistaken him for a tourist rudely hitching a ride. Even more surprising for both us and the happy couple, though, is the fact that his two female companions are the organist and a singer who we later discover is a member of the Slovenian National Opera and who the previous week had been singing for French President Nicolas Sarkozy... 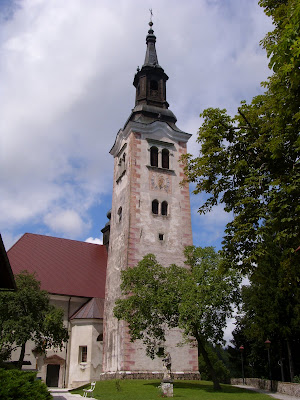 * The bride and groom ring the church bell and then it's back outside into now-beatiful day, where they're a tourist attraction. As might be expected of a party largely comprised of Lancastrians, everyone else cowers from the sun's unexpectedly fierce rays under umbrellas, trying to pass them off as parasols. 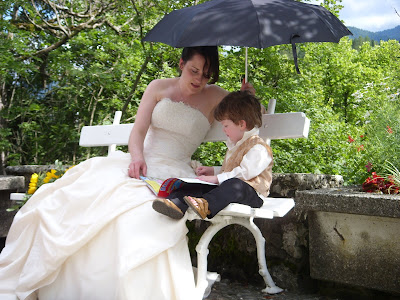 * Back on the mainland, by which time the weather has begun to turn again (talk about lucky...), we head back to Pension Mayer for blueberry schnapps and a slap-up five course meal. Cue ham and cheese, mushroom soup in bread pots, steak in a bitter cherry sauce, turkey and vegetable roll and creme caramel, all polished off to the accompaniment of 'She'll Be Coming Round The Mountain' performed on a zither by a chap in full traditional costume but plugged into a Marshall amp.

* The evening do, down in the cosy wood-panelled cellar, is a relatively restrained affair, everyone stuffed and drowsy. The wedding cake is cut (a sumptuous chocolate mousse gateau - none of that marzipan nonsense, thankfully) and there's a quiz before a scratched CD copy of Abba Gold gets a few people on their feet to work up enough of an appetite to tuck into the midnight feast of bread, cheese and ham. The night comes to an end with an appearance from a well-wishing couple from the groom's home town of Oldham, who've been visiting the same Slovenian couple here every year since 1963. It's a touching moment at the end of a day that's been full of them. 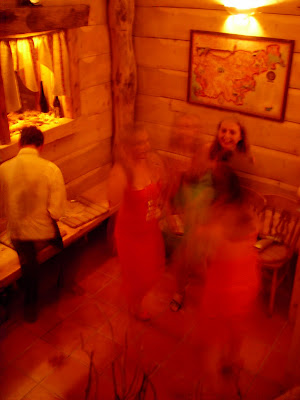 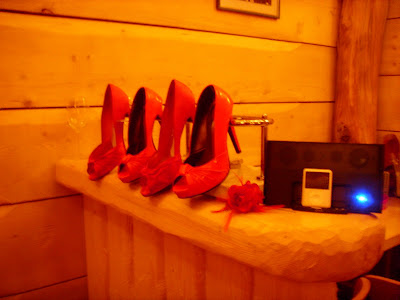 Next time: the long journey back via Munich and Paris - branded toasters, tennis balls made of liver and sexy shops...

The story so far: Paris, Munich, Vienna, Ljubljana
Posted by Ben at 11:50 PM