Larks in the park

When I said Glastonbury would be my one and only festival of the summer, I hadn’t quite counted on Woodstick, a free charity shindig organised by Cardiff indie scenesters that’s not so much a micro-festival as a picnic with a wealth of musical entertainment to accompany the cocktail sausages and homemade carrot cake. Bute Park was the scene of this year’s Eisteddfod, which finished yesterday, and so it’s fitting that it should now be playing host to some of the capital’s best English language acts.

The blow of arriving too late for Silence At Sea is softened by the fact that they’ve now been joined by assorted friends and accomplices for a Little My set. Barely all managing to fit under the gazebo canopy which forms the improvised stage, the indiepop collective are their usual charming, gentle, cheek-caressing selves. With its stylophone intro veering briefly off into the ‘Happy Birthday’ demo and subsequent ace recorder solo, ‘Sellotape My Hands’ is the inevitable climax and highlight. Comedian Michael McIntyre has observed that books for teaching the alphabet to kids (“A is for apple, B is for …”) imply that “xylophone” is one of the 26 most important words in the English language; for Little My, you suspect, it really is.

Judging by the thick wodge of supplements stuffed under Spencer McGarry’s arm when he arrives, Woodstick has rudely intruded upon the traditional Sunday pastime of digesting the papers. His solo set is rudely intruded upon in turn by the elements, the fine drizzle sent down from above interpreted by the man himself as God’s vengeance on an atheist, or perhaps just as a commentary on the music. If the latter, then the likes of ‘Leader Of The Chain Gang’ suggest that the Big Fella’s got very poor taste. It’s not every festival where the main stage performer wets his whistle between songs with a swig of Pimms and invites his audience to invade the stage to avoid from getting too damp.

On an afternoon when most of the featured acts have already received the official SWSL seal of approval, Broken Leaf aka Rhodri Viney is one of the few exceptions. Despite being rather more traditional in tone and style than his fellow performers, and attempting one tricksy cover which he himself concedes is overambitious, he impresses, largely by virtue of a fast, impassioned playing style and unflinching lyrical honesty, both of which are suggestive of what The Wedding Present might sound like if David Gedge pared them back to the bare bones. Little wonder, then, that he has the seal of approval from Cardiff's indie royalty, namely Gorky's Zygotic Mynci and Super Furry Animals.

We may be in the midst of the summer holidays, but The School are still open for business – that business being to banish dark clouds whether metaphorical and literal. The Parallax View sponsored popsters’ set is certainly short, comprising just four songs – but it’s also beautifully sweet. ‘Valentine’ in particular is unaffected and cute-as-a-button, cheerily heralding the return of sunshine and blue skies. Surely Ken’s right and it won’t be long before everyone wants to get themselves educated. 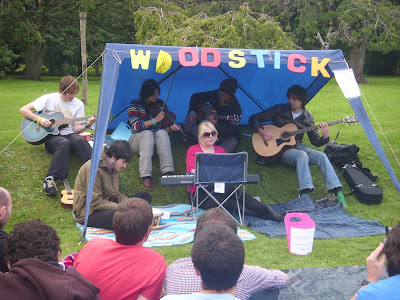 Is it just a quirk of scheduling that the festival’s nominal headliners “Gindrinker are able to get closer to a School than their restraining orders usually permit? DC prefaces twenty minutes of typically misanthropic malevolence that’s magnificently contrary to everything that’s gone before by pointing out: “This is a free show, so you can’t get your money back”. As if it’s likely anyone would ask. The fact that this is an acoustic performance doesn’t blunt the duo’s bite one jot. Savage opener ‘Delia’ is evidence that Graf’s recovered sufficiently from a torn nail when they supported Times New Viking, while a half-remembered version of ‘Iron Man’ winds up as an acidic tirade against Ozzy for destroying his band’s reputation by agreeing to the filming of ‘The Osbournes’. Only they could conclude a festival as generally smiley and mild-mannered as this with a slouching, bilious anthem called ‘Hanging Is Too Good For These Bastards’, the chorus to which is screamed out for the benefit of the park’s passing dogwalkers and scampering pre-teens. 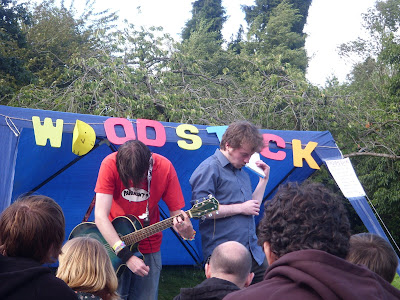