In which we pass up the opportunity to try minced lung of veal and find someone from the Stevenage Tourist Board in the unlikeliest of locations...

* Our tickets are in first class, by complete fortune. They mustn't have seen us coming.

* This is more like it - an unscheduled and enforced change of trains at Forbach on the border means we revert to rubbing shoulders with the peasants in cattle class and delays our arrival into Mannheim by just long enough that we miss our onward connection. Even then, though, we've only an hour to wait until the next train - enough time to grab a beer and a huge durum (like a doner kebab, but with crispy pork, so much, much better), while rejoicing at the discovery that not everywhere is as horrendously expensive as Paris (we can forget thoughts of auctioning off internal organs, then) and marvelling at the cans containing a magic elixir of beer, cola and energy drink.

* Is it an unwritten law of travelling that whichever direction you walk out of the train station in search of your accommodation will be the wrong (if not even the opposite) one? After more touristy bumbling, we come across Hotel Regent, barely a minute's walk from the station's main exit. 4* seems to mean a bedroom big enough to swing several cats in, each holding onto the other's ankles; bogroll that's like blotting paper; two basins, his and hers, side by side so any ablutions can be carried out in tandem rather than series. Everyone's catered for. Too lazy to towel-dry yourself? There's a fierce drying lamp set into the ceiling of the bathroom. Busy single man on the move? Something called a "Travel Pussy" is available from the vending machine in the toilets downstairs...

* After admiring the fountain in Karlsplatz and noting that in Germany Jesus's speciality is jewellery and watch-making rather than gherkins, we duck into the Augustinerhalle on Neuhauser Strasse. Our huge-headed beers and meals are slapped down by our waiter, an unhappy chappy who I'm disappointed to see isn't wearing lederhosen - perhaps that's the source of his own disgruntlement. Equally disappointing is the discovery that Currywurst, rather than being a curried sausage, is actually a normal sausage served with copious amounts of ketchup and curry powder, but it's quick at least, and has the virtue of not being the minced lung of veal which my rusty German could have landed us with. 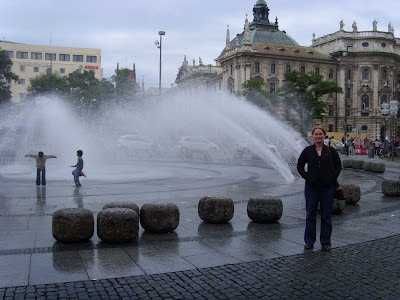 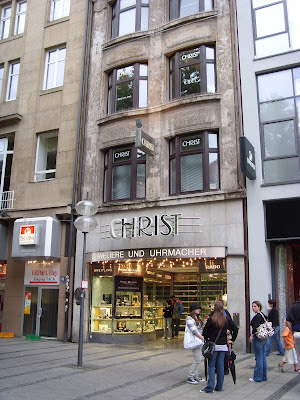 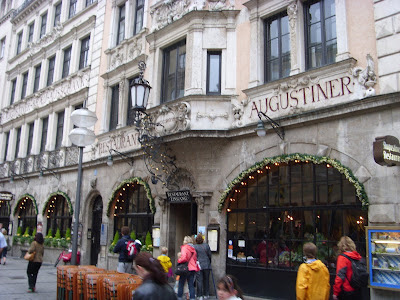 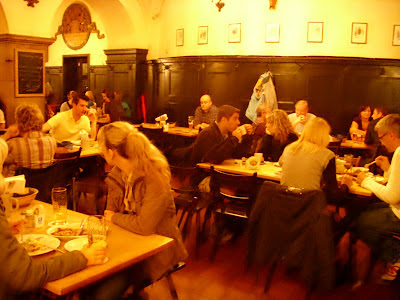 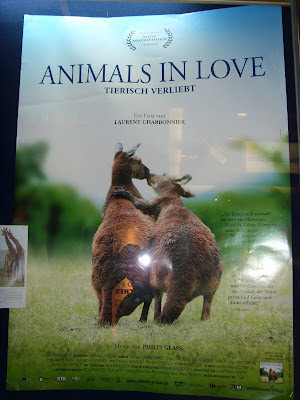 * Plain, unadorned and built of red brick, the city's cathedral the Frauenkirche is the ecclesiastical equivalent of a Barratt house. Apparently, it's late Gothic, but if you didn't know better you'd think it was all razed during WWII and subsequently rebuilt, not just the roof and one of the two 100m high towers. 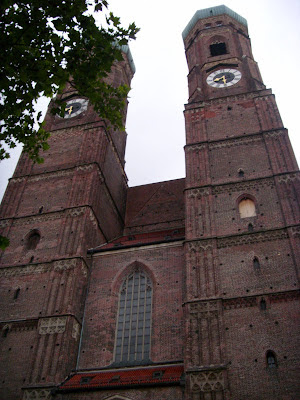 * Another Augustiner pub, this time am Dom (that's "at the cathedral" to you). I enjoy another local brew, trying to get my head around the concept of a "dunkles Weissbier" (a "dark white beer") - this helps explain. Meanwhile, Jenni opts for what turns out to be extreme schnapps - apple and pear flavour, apparently, but all I can taste is the flames in the back of my throat. As in the Augustinerhalle, the menu stresses that the local Weisswurst must be eaten before noon. There's no explanation - perhaps they turn into pumpkins afterwards, and, by virtue of being vegetable rather than animal, are no longer considered edible by the locals?

* Arriving in a damp Marienplatz it's clear we've missed the party - a stage is being packed up and mobile bars are filing away. On one side is the Peterskirche and on another the Neues Rathaus, which, despite looking far more authentically (ie totally OTT) Gothic than the Frauenkirche, was actually only begun in 1867. 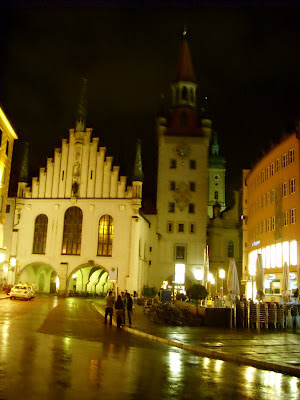 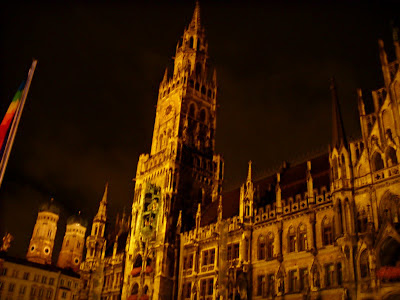 * Back to the Augustinerhalle for a final pint of the night. It being a Monday, it's pretty quiet - it seems my visions of witnessing a putsch can be forgotten... 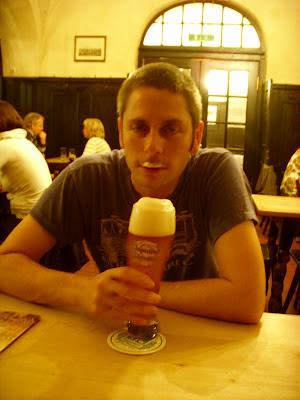 * Our walk back to the hotel takes us past first a busker in a shop doorway, entertaining crowds with a mixture of stand-up comedy and Rolling Stones covers, and then a shop whose window display indicates it caters for nationalistic chefs while also suggesting that Germany condones child labour on building sites (provided they're suitably attired, of course). 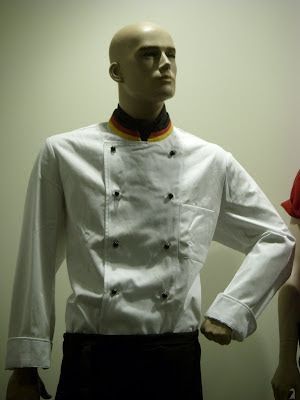 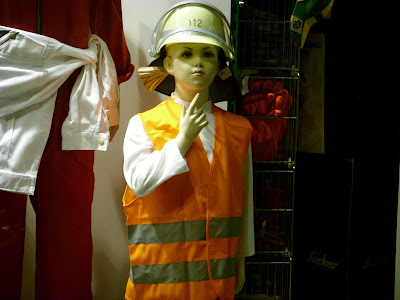 * Stuffed with a sumptuous breakfast, we waddle out into the rain. It really is miserable, but at least the man in the shop that sells nothing but umbrellas is happy that we've brought the British summer with us.

* Either my ears are deceiving me, or Nottingham legend Xylophone Man faked his own death, and is actually alive and well. Certainly the haphazard plinking and plonking, devoid of any discernible tune, that rings out from the Neues Rathaus every day at 11am and noon, bears all the hallmarks of the great man. We don't stick it out until the end, though, keen for shelter from the elements but, more pressingly, the loud, clueless, guffawing American students who claim to pass as tour guides for the city. 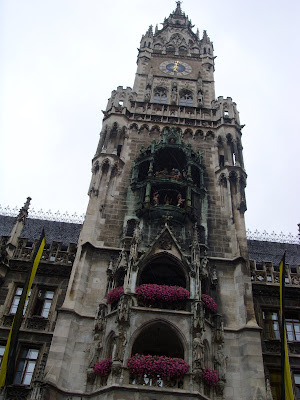 * Midday glasses of wine in opulent and genuinely palatial surroundings? Well, we are first class and 4* these days, darling... Just try telling any of the well-to-do locals in the Pfalzer Residenz Weinstube that wine bars are so 80s. 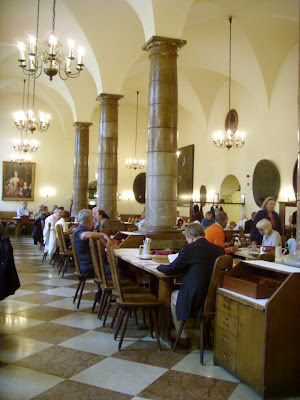 * Given the German veneration of the man, we're rather disappointed to discover that the Hofgarten, round the back of the Residenz, isn't actually a tribute garden to David Hasselhoff. Quite nice if it's sunny, we imagine, scurrying onwards in search of dryness. 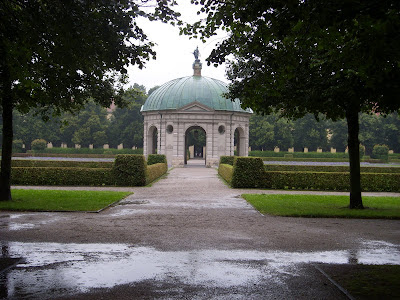 * Hofbrauhaus is the most famous of the beer halls, but it's also supposedly the least authentic, and the fact that the huge building houses not one but two tat shops to tourists seems to bear that out. Branded golf balls, anyone? But look around and it's evident many if not most of the drinkers on what is a wet Monday lunchtime are Germans in their 50s. Yes, this is Munich's equivalent of the Square Peg in Birmingham, just without the smell of beery carpet and stale sick. Having been served by the impeccably coiffed spit of Ferris Bueller's dad, we strike up a conversation with the retired local sharing our table (the sociable seating arrangements are all part of the charm), who, discovering we're English, tells us he's visited Stevenage and that it's "very nice". Perhaps that's only because, as a young man, he once slept a night under a bridge by the Royal Festival Hall in London and another in a police cell in Inverness when all the hostels were full - everything's relative, after all. But we've got a train to catch, and have to say our goodbyes hurriedly as the oompah band strikes up. 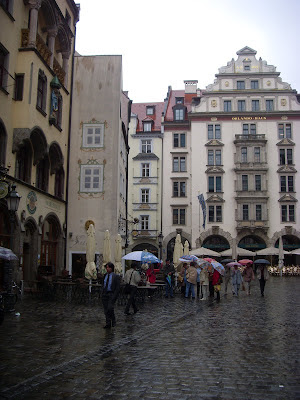 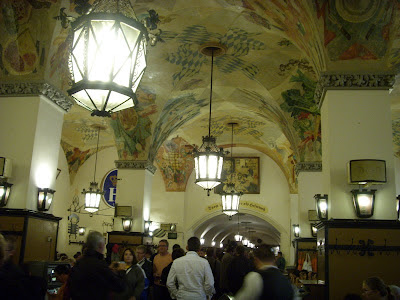