How could ATP spice up a formula that some might feel was getting a little tired? Easy - by approaching not just one great band but three, and asking each to curate a different day over the course of a weekend...

3.30pm
Perhaps it's fitting, given we're en route for ATP's Nightmare Before Christmas, that we're enduring a nightmare journey involving one missed bus, one broken-down bus and a burst tyre. The sight of the sign for the Bakelite Museum is even more welcome than normal, bringing relief at the knowledge that it won't be long before we're mixing it up with similarly scruffy oiks in Minehead Tesco.

4.15pm
Wristbands collected (relatively quick), chalet located (nice and close to the action), beer in hand. As mood-setters and party-starters go, you can't go far wrong with No Age's 'Everybody's Down'. Hopefully they'll play it tonight and this time around that pesky Bob Mould won't be on hand to insist they play Husker Du songs...

5.30pm
In the programme, LES SAVY FAV claim to have been asked by ATP "to curate the ultimate party line-up". That line-up quite rightly kicks off with the curators themselves, who waste no time in cranking up the fun dial with a riotous set in Reds. The initially poor sound is soon overcome and the band crash through a sequence of fractured, fevered songs, but inevitably it's Tim Harrington who's the lightning rod for our attention: using an alarm clock as a prop, drinking from a kettle, wearing a spangly ladies' blouse, regularly bellowing "EVERYTHING LOUDER!" in the direction of the sound desk, making a roadie strip and imitate him, hanging from a ceiling beam and in the process dislodging confetti that's been there since Afrirampo joined Lightning Bolt to close the festival two years ago. For once, Shellac may not be on the bill, but thankfully Les Savy Fav provide the requisite gradual-drumkit-dismantling-to-end-the-set entertainment. 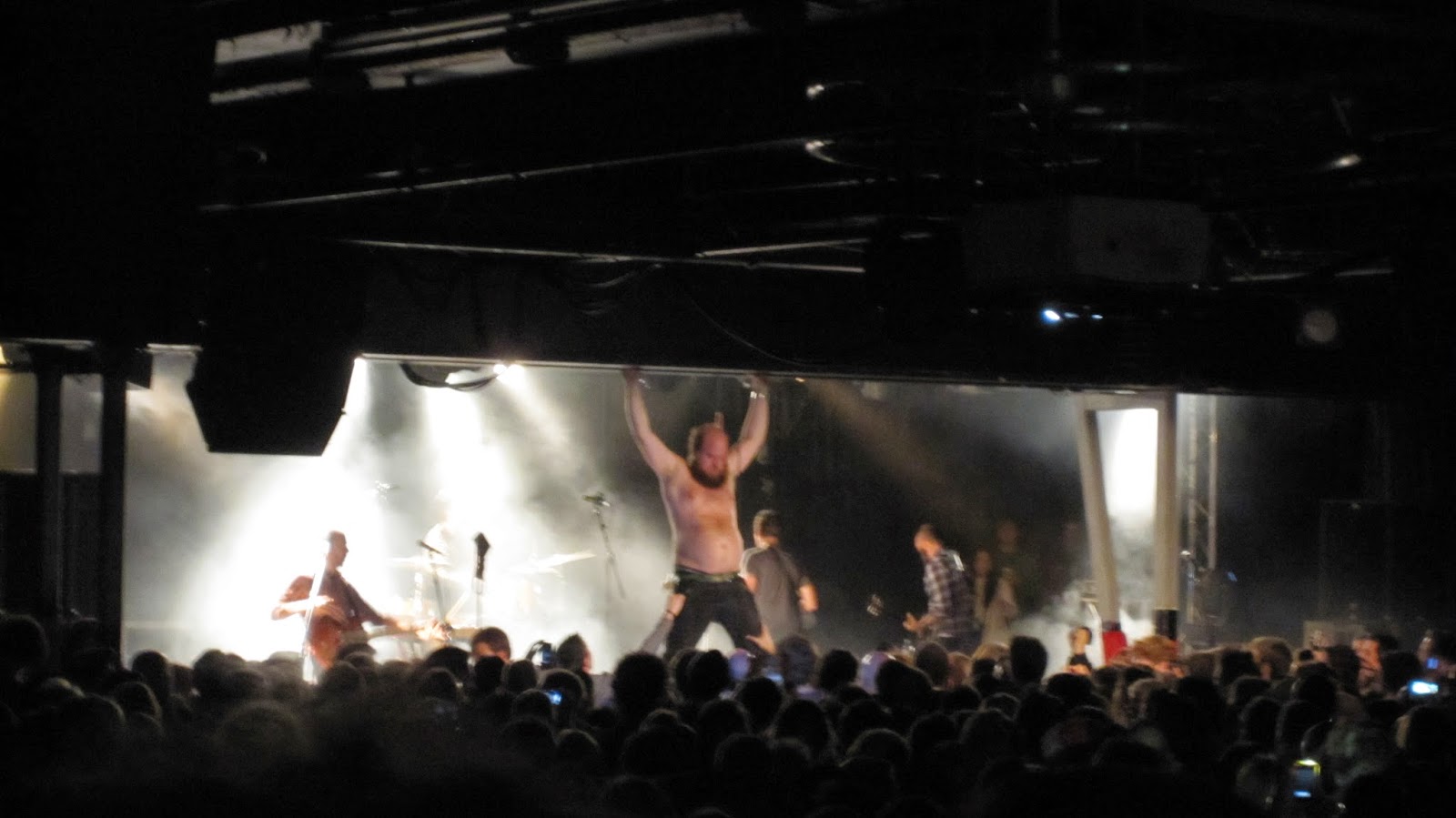 6pm
First serendipitous encounter of the evening: my old ATP-going mucker Dave. Our meeting place is the Centre Stage, which doesn't smell of sick or soup - yet.

6.30pm
One thing's for sure: MARNIE STERN (Centre Stage) can shred and fingertap with the best of 'em. Mercifully, however, she's no female Yngwie Malmstein - on the contrary. Not only is she smart and self-deprecating, she's also capable of writing actual songs - prickly, restless songs that sound as though they're walking on a bed of nails or (occasionally) like Rage Against The Machine being stung by a swarm of angry wasps. Marnie and her bassist discuss ladyparts ("The Vagina Dialogues", she quips) before she enquires: "Have we won you over yet?" Marnie, you had me at "Hello".

7pm
Second serendipitous encounter of the weekend: former chalet buddy Mike, who's quick to enthuse about The Budos Band.

8pm
A chalet pit-stop. ATP TV is showing The Godfather and old Les Savy Fav live footage, with the band clad in bloodied shirts and suits. A quick blast of Rites Of Spring and Shabazz Palaces, a swift Jagerbomb and we're back out into the night.

9.15pm
For anyone missing Sleater-Kinney, WILD FLAG (Centre Stage) are the next best thing, starring two-thirds of the band (Carrie Brownstein and Janet Weiss) plus fellow female indie rock hero Mary Timony and Rebecca Cole. Their eponymous debut's lead single 'Romance' is a corker, as is a track faintly reminiscent of Dinosaur Jr. I'm temporarily distracted by having my drink spilt on my leg, but it's hard to remain irritable in the company of Brownstein and Timony, who look like they're having a ball. 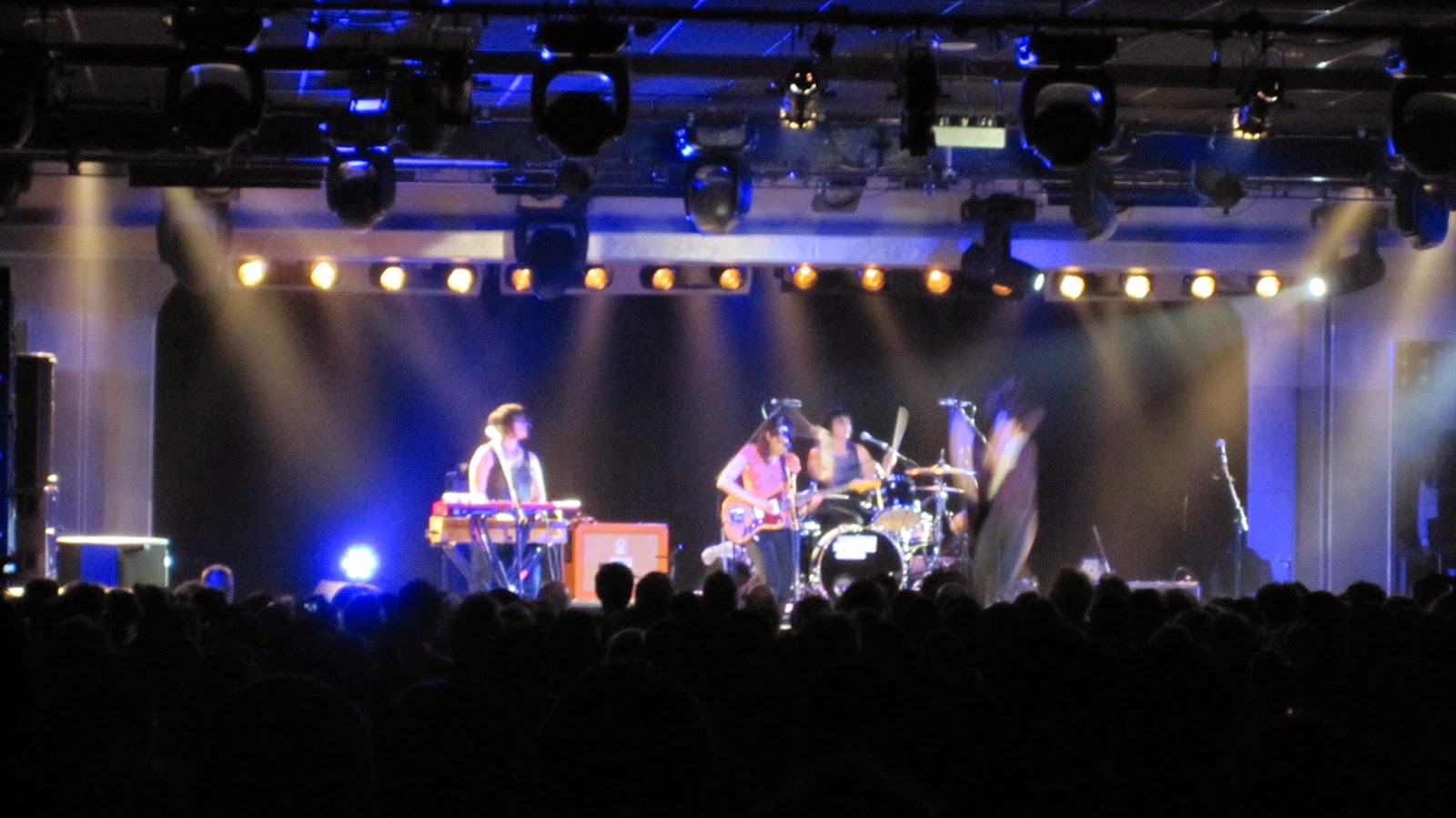 10pm
Responsible for quite probably the best gig I've seen in Oxford to date, OXES (Reds) have a lot to live up to. Thankfully, they're more than up to the task - and most importantly, they've brought their boxes. Natalio Fowler's beard makes him look like Bob Mortimer's O'Hare, while fellow guitarist Marc Miller appears to be wearing a shellsuit and a Whitney Houston T-shirt, topped off with a sideways baseball cap. When perennially goofy wifebeater-sporting drummer Christopher Freeland fucks up a song, he gets the thumbs down from his bandmates, but there's no time to dwell on it, as they rampage at breakneck speed through a succession of instrumental math-punk to the set's all-too-premature conclusion. 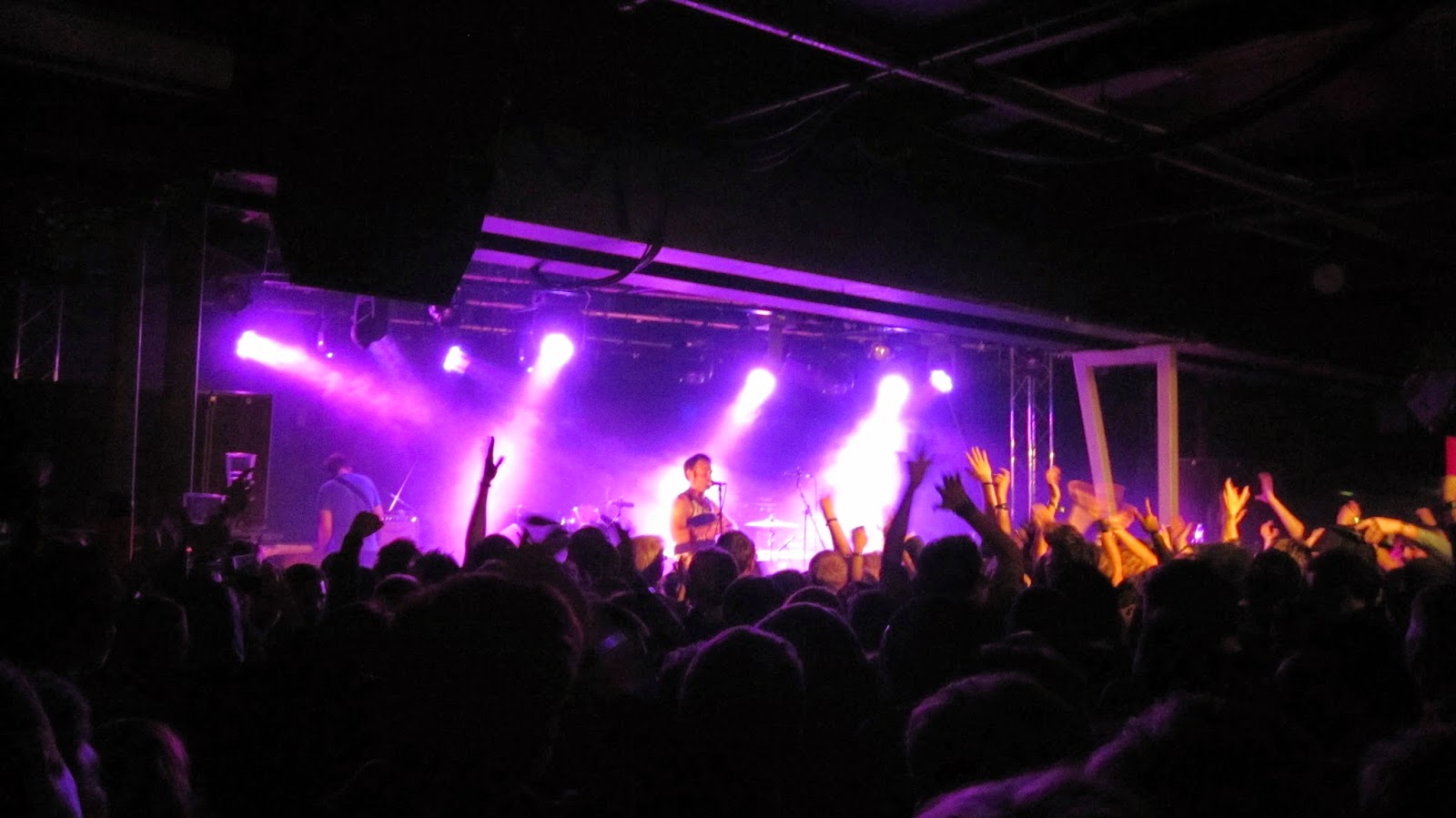 10.45pm
My companion Chris announces he's seen FUTURE ISLANDS ascribed the horrifying label "post-Wham", so what possessed us to come here to the Crazy Horse to watch them is anyone's guess. What possessed Les Savy Fav to include them on the bill is rather clearer - Tim Harrington must surely see the synthpop trio's frontman Samuel T. Herring as a kindred spirit, a fellow maverick unafraid to risk ridicule with a bizarre voice that veers wildly between registers and tones and dance moves that are, if anything, even more odd. Neither that voice nor those moves make them any good, mind.

11.30pm
The curators and Oxes have set the pace - will the next act be able to keep up? Have no fear, for that act is NO AGE (Reds). Everything In Between may have seen Randy Randall and Dean Spunt expanding their horizons and adding further colour to their palette, but tonight they go right back to basics. That means no messing about, no subtleties, no Bob Mould - just a heads-down punk rock blitz that pins you to the wall by the throat and refuses to let go. The icing on the cake is 'Everybody's Down' to finish, our party greeting the opening chords with much whooping and high-fives. They've hardly been shoddy on our previous two encounters, but this is the best show I've had the pleasure to experience yet. 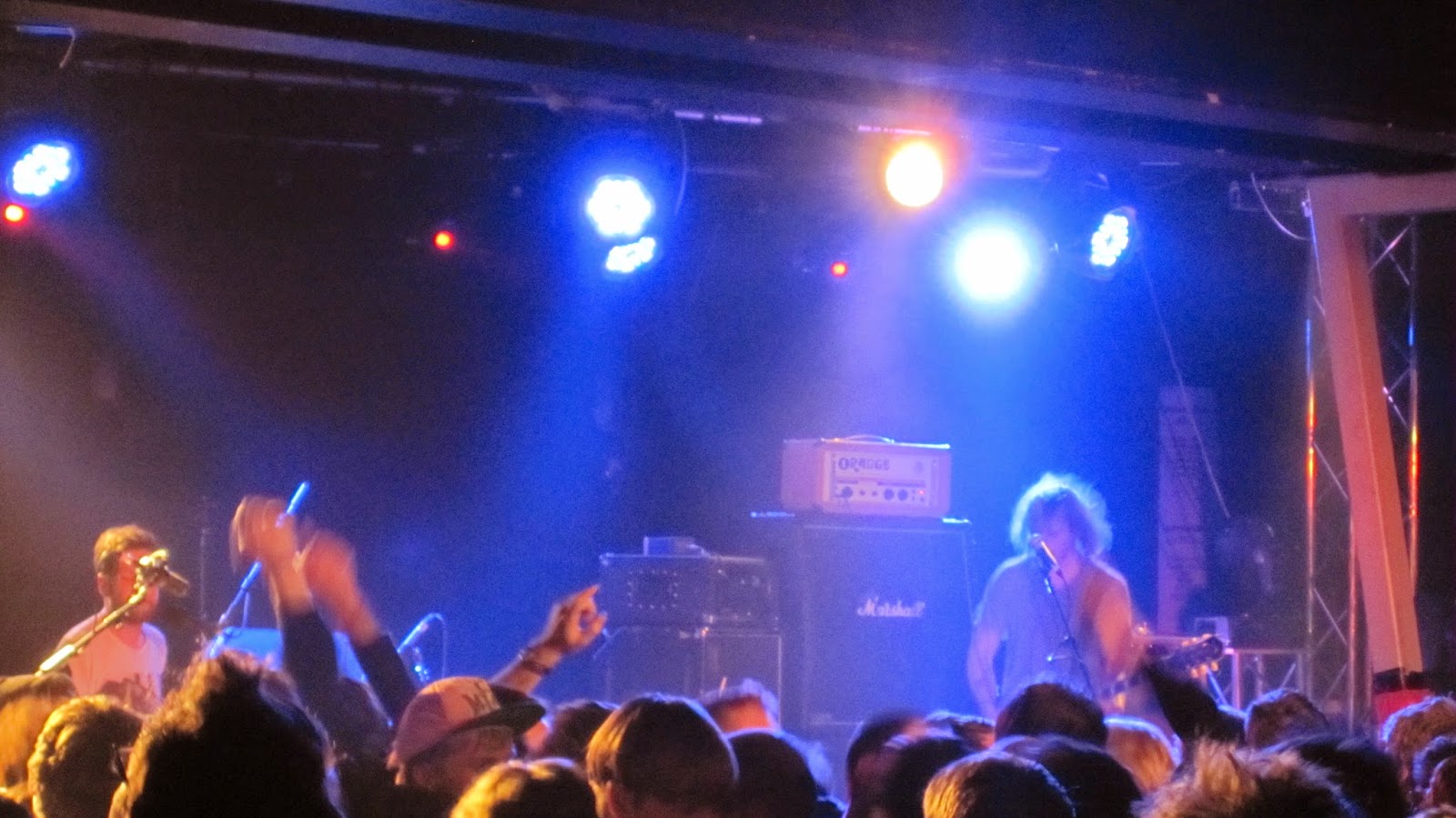 12.30am
ATP has become synonymous with exhuming old punk bands, but HOT SNAKES (Centre Stage) are rather shorter in the tooth than most, having formed in 1999 rather than the late 1970s. Starting out as a side project for John Reis aka Speedo of Rocket From The Crypt, reunited with old Drive Like Jehu bandmate and buddy Rick Froberg, they soon blazed a trail of their own with a brand of post-hardcore that replaced asceticism with a rollicking rock 'n' roll sensibility. Even for someone who only owns posthumous live album Thunder Down Under, tonight's set is an absolute treat. Not that I'm the only one enjoying myself - Reis appears delighted to be able to leave frontman duties to someone else (Froberg) for a change. I'm missing Holy Fuck for this, and the highest praise I can give Hot Snakes is that I don't regret that decision one bit. 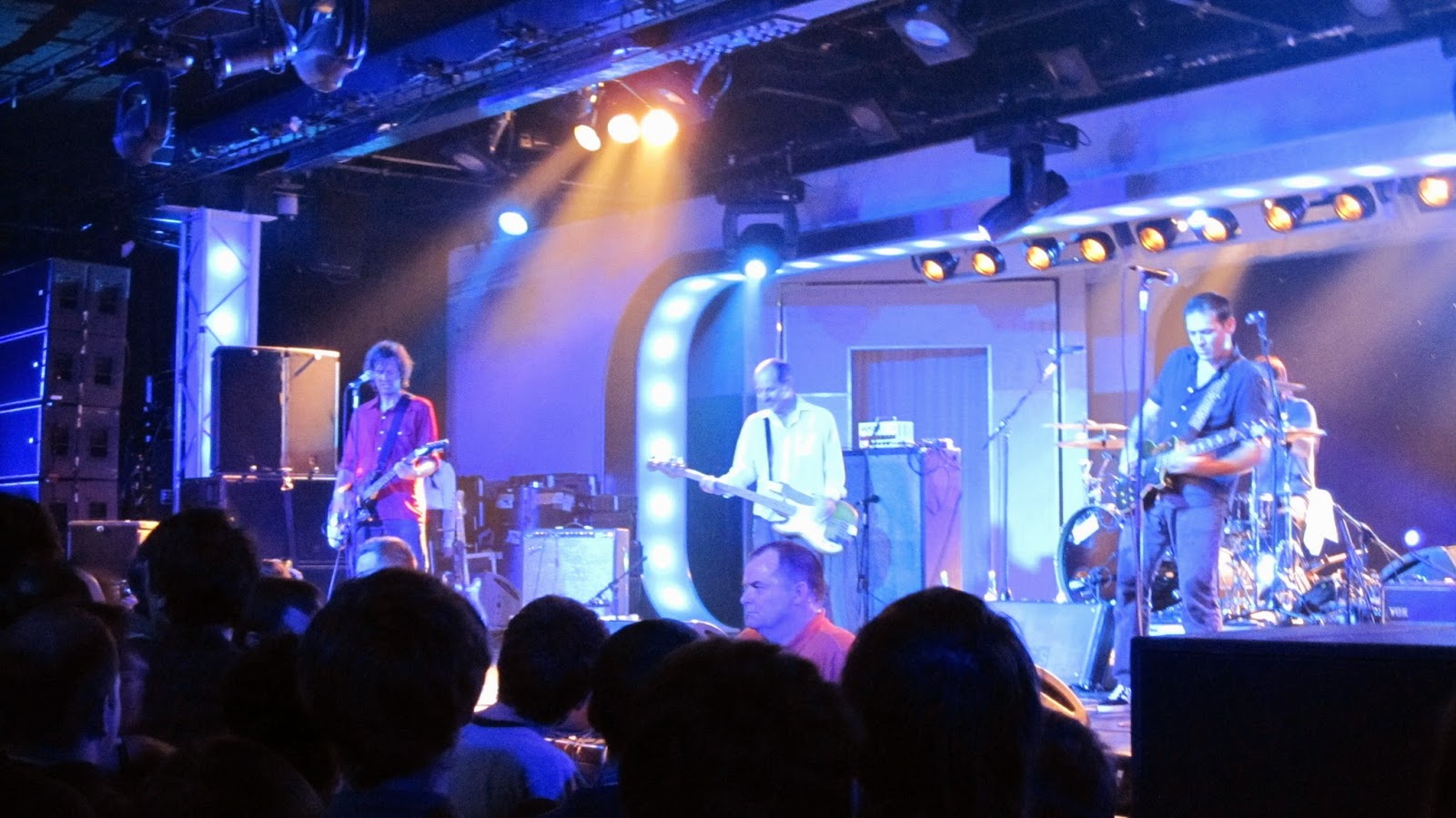 2am
What I do regret, however, is being so worse for wear that I flake out on the sofa during a supposedly quick refuelling trip to the chalet and end up sleeping through Les Savy Fav's headline set. After the entertainment they've brought us over the course of the evening, I really should have had the courtesy to turn up and say thank you.
Posted by Ben at 11:46 AM