(The first two parts are here and here.)

10am
Question of the day: do third nipples lactate? Answers on a postcard.

10.30am
Conor switches outfits for the fourth time this morning. His excuse? "The weather looks changeable." 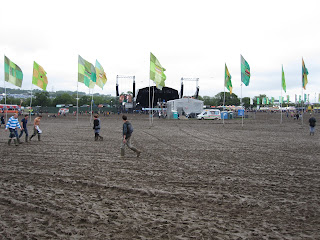 11.30am
We check in with Adam, Alison and crew. John appears to be sporting a temporary Union Jack tattoo. Alison recounts having dreamt seeing David Cameron run over by a Ford Sierra (wishful thinking, more like), while they all hazily remember seeing a naked man in the West Holts field fall to the ground when the pole he'd climbed up snapped.

12noon
Pleasingly, Newcastle Utd shirts seem to be among the must-have fashion items of the day, along with wellies and absurdly short skirts.

12.30pm
Aaaaaand we're up and running, with METRONOMY (Pyramid Stage). White funk might call to mind Jamiroquai - not the best for those of us who've woken up with delicate stomachs - but Joseph Mount and chums do it well (and significantly better than at Green Man in 2010). Less Twat in the Hat and more Hot Chip on a pop tip, with drummer Anna Prior and bassist Gbenga Adelekan setting the bar very high for rhythm sections to come. 'The Look' and 'She Wants' are highlights, and the only real disappointment is that their trademark chest-mounted lights have no effect in the daylight.

1.15pm
I spy with my little eye a chorizo stall. Hmm, that may just be getting my custom later...

1.30pm
Given last night's Somme-like conditions in the vicinity, STINKAHBELL's griminess is perfectly suited to Cubehenge (and its miniature replica, Wellyhenge). The basslines, hard and heavy, buzz straight through to your bones while the vocals do a less effective job of soothing the brow. 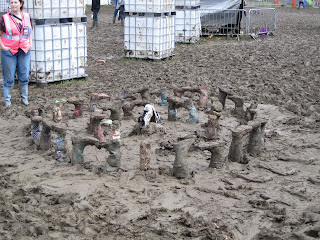 1.45pm
Opposite, on the East Dance Stage, the extraordinary BEARDYMAN aka the Beatbox Chef of YouTube fame, is whipping up a treat. Mos Def, 'Fuck Tha Police', the sound of a whisk - it's all chucked into the blender. The tent is so packed we can't even see in, and Jen remains less than impressed, commenting on all the "white people pretending they're in 7 Mile"...

2pm
As Kiwis who are neither Crowded House nor on Flying Nun, Google-at-your-peril outfit THE NAKED AND FAMOUS (Other Stage) are very much a rarity. There is a hint of M83 and LCD Soundsystem's finest moments ('Someone Great' and 'All My Friends', of course), but MGMT are an unfortunate touchstone on 'Young Blood'. The sound levels aren't right, Jen takes issue with the guitarist's preposterous haircut, and while he can declare "All of our stuff broke, but we're so glad we came", I'm not so sure everyone else is.

2.45pm
As someone who (as usual) has meticulously planned the day's schedule, the revelation that Radiohead have been confirmed as this evening's special guests on the Park Stage puts the cat very much amongst the pigeons. Time for a rethink...

3.30pm
Fo shizzle, in the drizzle, it's WU TANG CLAN (Pyramid Stage) - or, as Jen insists on calling them, "the Klangons". The collective fail her primary test, enunciating poorly - the only lyrics readily decipherable are repeated references to themselves and copious swears. It's fairly safe to say, though, that the song about ice cream is not about ice cream, and neither is 'Gravel Pit' about quarries. There's a tribute to ODB, a chap sporting a dressing gown and a black left-handed glove, and a few flunkeys milling about, but precious little to brighten the spirits. They aren't as well known as Snoop Dogg, Dizzee Rascal or Jay-Z, their rap predecessors on the Pyramid Stage, and neither is Glastonbury the sort of place where crowds can easily encouraged into bellowing a sentiment like "Make money, take money". Jen declares, "I'm not raising my fist when I don't know what I'm condoning", while Dan ponders why we're being asked to make the Wacaday hand gesture...

4.15pm
A bloke weaves his way through the crowd peddling T-shirts bearing the slogan: "Bono is a cunt". Clearly not everyone is rabidly enthusiastic about the prospect of U2's headlining set later tonight.

4.45pm
We're two whole songs into BB KING's Pyramid Stage set before he even deigns to appear - though at the age of 85 we should perhaps forgive the blues legend forty winks backstage. Forgiveness ends there, though, as what unfolds is much like watching a grandfather sat on a back porch widdling away meaninglessly. Those creaking joints only allow him to boogie by proxy these days - though I for one am less inclined to boogie and more inclined to consult the schedule in search of a get-out clause.

5.15pm
"This is the East Dance tent so here's a dance song." Any danger of slipping into a coma is averted - and in some style - by THE JIM JONES REVUE. Natural heirs to King they may be, but you suspect that these suited, booted and slick-haired rabble-rousers could never bear to be seated on stage. The fervour with which they testify to their faith in the incendiary power of traditional rock 'n' roll is positively evangelical (Jerry Lee Lewis being the Almighty in this particular religion), and in 'High Horse', 'Shoot First' and 'Burning Your House Down' they have a trio of songs that at last light the blue touch paper for the day. 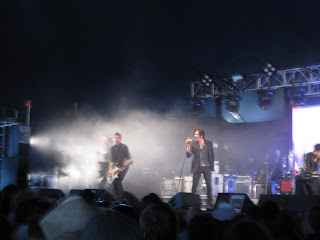 6pm
But will BRIGHT EYES (Other Stage) be able to keep it burning like fire? It all hinges on which Conor Oberst turns up. The man intent on opening the Pyramid Stage in fine fashion by showcasing the lyrical and musical genius of a pair of forthcoming new albums (2004)? The petulant, drunk brat seizing the opportunity of a headline set to badmouth the dearly departed John Peel from the John Peel Stage (2005)? Or the muted and white-suited band leader throwing a strop at an abruptly curtailed set (2007)? None of the above, as it happens. Instead we get a smiling Oberst, apparently on a one-man mission to rid cape-wearing of the stigma associated with it by Rick Wakeman, and a looser, more relaxed band freewheeling splendidly through both the best of their past - 'Four Winds', 'Poison Oak' and especially 'Ode To Joy' - and the best of their future, taken from new album The People's Key ('Jejune Stars' and set-closer 'One For You, One For Me' are particularly impressive). For the most part, Oberst manages to resist the temptation to sound off, though at one point he does spot a snack van on the horizon and declare: "Square pies are for creeps". You just couldn't go a whole set without offending someone, could you Conor?

8.30pm
Right, I've sacrificed giving Fleet Foxes a second chance for this - but that's OK 'cos this is RADIOHEAD, innit? Last year, Thom Yorke was joined by Jonny Greenwood in this exact special guest slot, and it proved very special indeed. Surely, with the full band, this is going to be amazing. Sadly not - I'm rueing the decision from the very start, my enjoyment blighted by everything from the conditions (drizzly, muddy, chaotic) and the sound quality (dismal, though not surprising given that the Park Stage set-up should never really have to cater to people beyond the bowl, perched on the hillside) to the setlist (an almost exclusive focus on material from King Of Limbs that confirms it's a masterpiece of mastubatory dullness unlikely to gratify anyone but the band themselves). 'I Might Be Wrong' and an encore of 'Street Spirit' are token sops to those bedraggled few who bother to stick it out to the end.

9.45pm
Thankfully partial consolation is close at hand in the form of a PV Special: loaded nachos, cheese, jalapenos, wrap, refried beans and a whole lot more. It's a massive plateful, and well worth the outlay.

10.40pm
Sticking around in the Park presents the opportunity to get a sneak preview of one of the three curators for December's ATP - and even over the course of a small handful of songs, CARIBOU are little short of a revelation. The drummer is the focal point of a joyous explosion of Holy Fuck-esque live dance music which radiates a searing white heat and white light into the darkness of hearts dampened by the weather, the repeated invocation of 'Sun' seemingly an attempt at performing the polar opposite of a rain dance. Minehead can't come too soon.

11.30pm
Park Stage headliners Crystal Castles still aren't on, and as much as I want to blame Radiohead alone for the delay, there's no doubt the Canadian duo are now being divaish in the extreme. We're soaked through so retirement to the tents is the preferred option.

12.30am
Apparently Bono spent much of U2's set spouting about the state of the world without making any mention of his band's tax avoidance. No surprise there, then...
Posted by Ben at 12:55 PM